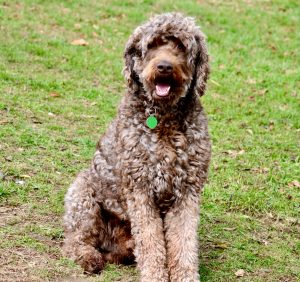 Zak walked slowly through my front door with his head down, as his previous pet parents brought in his very well-worn bed, a bag of food, and a large medley of meds.

Molly’s eyes were misty as she said her good byes. This was emotionally tough for everyone involved.

I remember him when he was a young enthusiastic dog. Never have I met a gentler dog. He came from a breeder out west when he was a few years old and lived here at Berkshire Hills for a while before moving to his home with Jon. He, like most of my determined and clever males, couldn’t stay here with all of the girls so he needed to go into a guardian home. We didn’t want any accidental breedings.

While he was living with us, twelve years ago, I often saw Zak cheek to cheek with some guy who was repairing something around the property. Zak was a zen boy and loved nudging people with his nose to get some snuggles.

My hope for Zak at 14 years old is simply for him to feel better physically, but even more so, I want to see some joy in him.

Zak has been here for a week now. Jon described him as aloof, but to me he was clearly depressed and probably in some pain. He lost the sparkle in his eyes. I saw that same thing with Kipling, my old guy, and realized it was a sign of pain. For Kipling it was his arthritis, and once dealt with the sparkle came back.

Zak was on a daily pain killer, along with fish oil, Dasuquin and Prozac. He was put on Prozac because Jon felt Zak was anxious. He had been chewing things around the house and getting into the garbage.  I know that chewing is a self-soothing activity and was sure Zak was frustrated with his changing situation and once here the chewing would stop. So, I weaned him off the Prozac.

And as with all my dogs, Zak was also put on a raw diet for one of his meals. So now, there are 9 dogs in the house that howl in great anticipation as I prepare their meal! I’ve been contemplating getting a pair of ear plugs.

I’m beginning to see subtle signs of joy, a slow tail wag here and there, a few deep and silent snuggles into my neck. He loves a good neck massage.