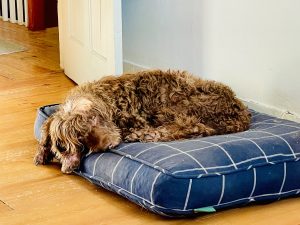 With all of the puppies we had this summer, I ran out of my raw food three weeks before my next order was expected to arrive. Puppies eat almost as much as adults!  The next order wasn’t coming in for several weeks, so everyone had to eat kibble.

Kiefer had his prescription kibble and the rest of my dogs do best on ACANA Free-Run Poultry Recipe, Grain-Free Dry Dog Food, as far as kibble goes.

A couple of weeks went by and I didn’t see any significant change in any of the dogs-besides huge poops. Huh, I thought maybe the raw food wasn’t responsible for the incredible improvement I saw with the boys. Could it have been the environment or maybe just a fluke?

But by the third week I noticed significant cognitive decline. Zak seemed confused and depressed, All of the older dogs responded slower. Kiefer needed to know where I was more than ever, which made me think his senses were not working as well. All of them were less engaging, but most of all both Kiefer and Zak’s hind legs were giving out. Kiefer’s legs would buckle even from just trying to get a drink of water, and Zak’s legs were splaying out from under him when he tried to get up off the floor. The boys went back to the conditions they had when they came to me in the beginning.

The order of raw food came in and finally, they were back to eating one meal raw food and one meal kibble again. Within days Zak could easily get up off the floor, and Kiefer’s legs stopped shaking and collapsing. The sparkle came back and the bounce in their step was even higher than before. The boys were enthusiastically engaging with our visitors again.

The change was SO significant.

I saw that with Kipling also, several years back when he was 14. But can I make bold statements based on one dog? No.  Now I’ve seen it in 4 old dogs.

I can say now, with confidence, raw dog food is medicine.