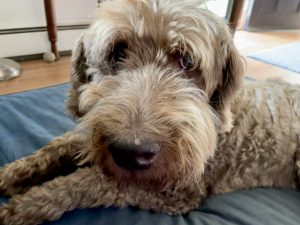 My old guys, Kiefer and Zak, have been here with us now for 5 months. Next month they will be 14.5 years old. I jokingly call them Benjamin Buttons, because I swear they are getting younger. But I would be lying if I didn’t admit that I freeze every time one of them is deep in sleep. I stand there, holding my breath, waiting to see an inhale.

The other afternoon, as usual, I had let the dogs out to lounge on the hill. The older ones, including Paloma, like to take long naps in the shade.  A few hours had passed and dinnertime was approaching. I called the dogs in and everyone eagerly came in, except Zak.  I called him several times to no response. So I searched under every bush and around every corner and couldn’t find him. I did several more rounds, maybe he went into the barn for his nap? He was no where to be found. The farm was so quiet.

I started checking the house. Maybe he got closed behind the pantry door. But no, he was nowhere to be found in the house either. At this point I was concerned. Had he passed out and was lying somewhere in the tall wild grasses? Is this how his life ends? I thought for a moment that if this was his last day, maybe it was a sweet way to go. Napping in the sunshine on a peaceful hill in the country.

I made my rounds again, calling his name and looking under the same bushes.  Suddenly his dusty colored head popped up from under the Sweet Mock Orange shrub!  Oh, I let out a huge sigh of relief! He never looked more beautiful.

Over the summer the older puppies had dug a shallow hole around the roots to stay cool. While napping under the shrub, Zak had slowly slipped down into that hole and was wedged under the shrub’s roots. He couldn’t shimmy himself out.

I had to cut the thick roots, and with the help of my daughter, we were able to push and pull him out. He was fine, but his back legs were a tad bit weak for having not moved them for some time. He stood up like a newborn foal and happily wobbled into the house just in time for dinner.

Sweet, silly Zak, so happy I have more time with you.